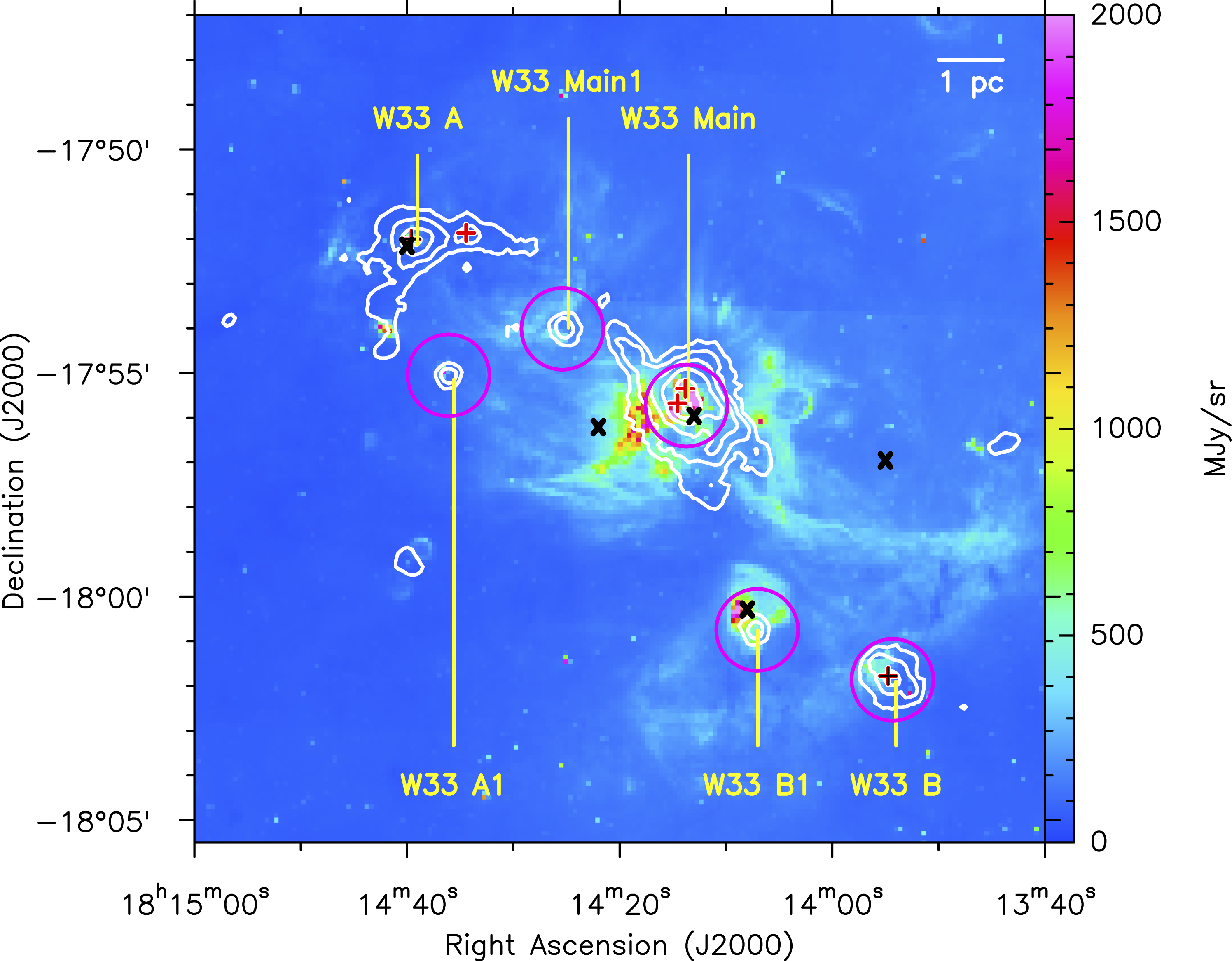 Infrared, submillimeter, and radio continuum as well as maser observations of the high-mass star-forming complex W33 show that it contains regions at different stages of star formation, from quiescent clumps to developed HII regions.

Previous spectral line observations towards W33 revealed a peculiar kinematic structure in the complex: two radial velocity components at 36 and 60 km/s, spread over extended parts of the region. Due to this velocity configuration, the kinematic distance of the clumps in the complex are not well determined which raised the question if all the clumps in the complex are physically linked. We conducted trigonometric parallax observations of water masers in three clumps (W33 A, W33 B, W33 Main) of the complex with the Very Long Baseline Array as part of the Bar and Spiral Structure Legacy survey. I determined the distances to the clumps and subsequently to the whole W33 complex, showing that all three clumps belong to one physically connected complex at a distance of 2.4 kpc (Immer et al. 2013).

Since the clumps in W33 belong to the same complex and probably evolved from the same giant molecular cloud, the primary material in the birth clumps is the same or at least similar, making a comparative chemical study of these clumps feasible. Due to similar distances to the clumps, observations at the same spatial resolution trace the same physical scales in the clumps.

We conducted spectral line observations of the W33 clumps with the Atacama Pathfinder EXperiment (APEX) telescope (PI: Immer) and the Submillimeter Array (SMA, PI: Immer) at 280 and 230 GHz, respectively, tracing different physical scales in the clumps (APEX: > 0.2 pc, SMA: 0.05 - 0.2 pc), allowing us to compare the chemical compositions with different resolutions. In the spectra of both datasets simple molecules like CO with widespread emission as well as complex molecules like CH3CCH or CH3OCHO with very compact emission are detected.

The chemistry of the clumps changes dramatically along the established evolutionary sequence, from quiescent clumps to the ultracompact HII region in W33 Main, especially on smaller spatial scales, traced by the SMA data. In the APEX data, the chemical complexity and diversity of the spectra increases from the prestellar/early protostellar phase to the HII region phase while in the SMA data, they only increase to the hot core phase. The SMA spectra of the HII region in W33 Main show almost only “simple” molecules, indicating that more complex molecules are either destroyed due to the vicinity of the HII region or their emission is too diffuse to be detected with the SMA.

We also calculated the integrated intensity ratio N2H+(3-2)/CS(6-5) from the APEX data in our six sources. This ratio follows a clear trend as a function of the evolutionary stage of the targets and is a good candidate for a "chemical clock" (Immer et al. 2014).

APEX Spectra of W33 B 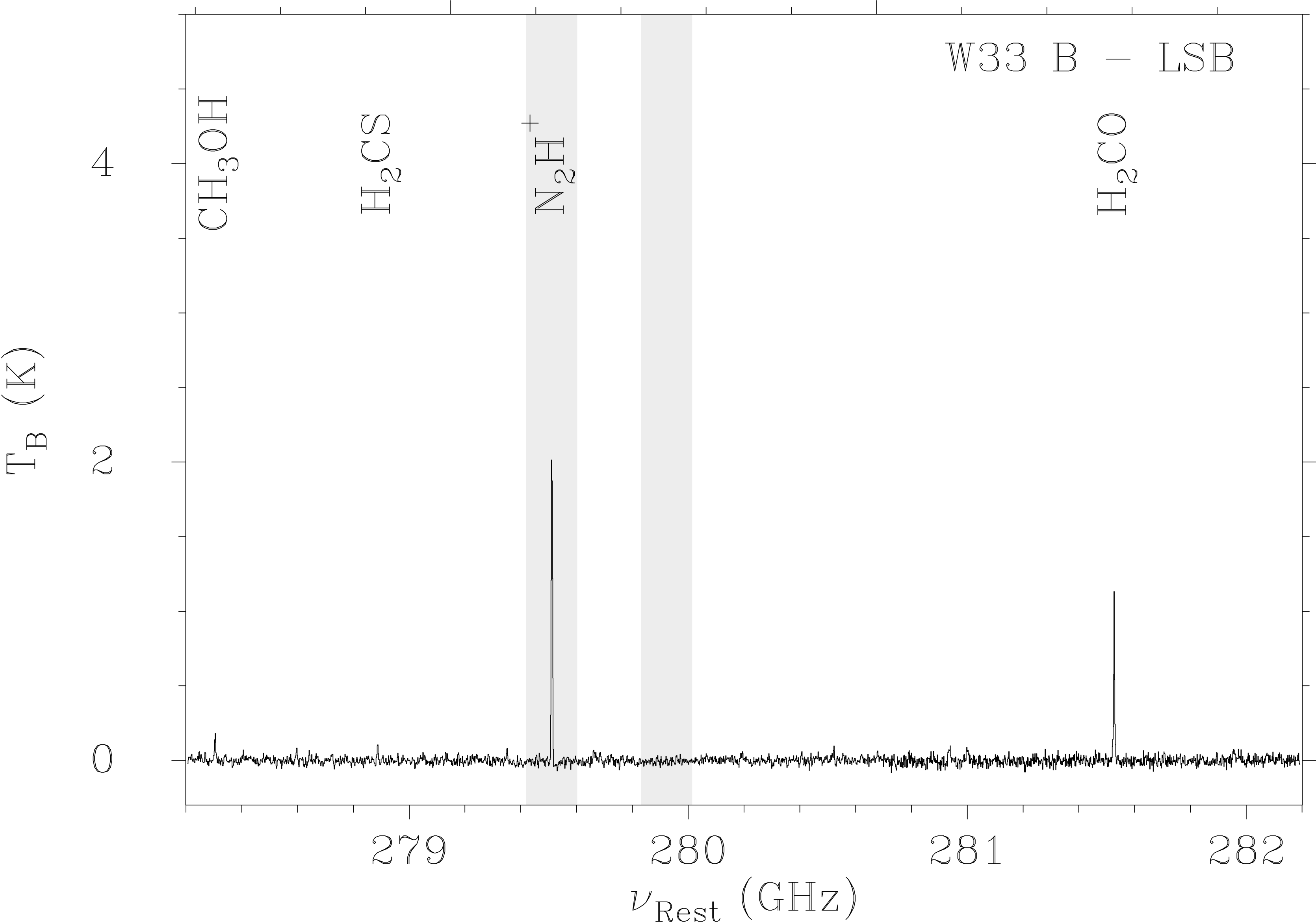 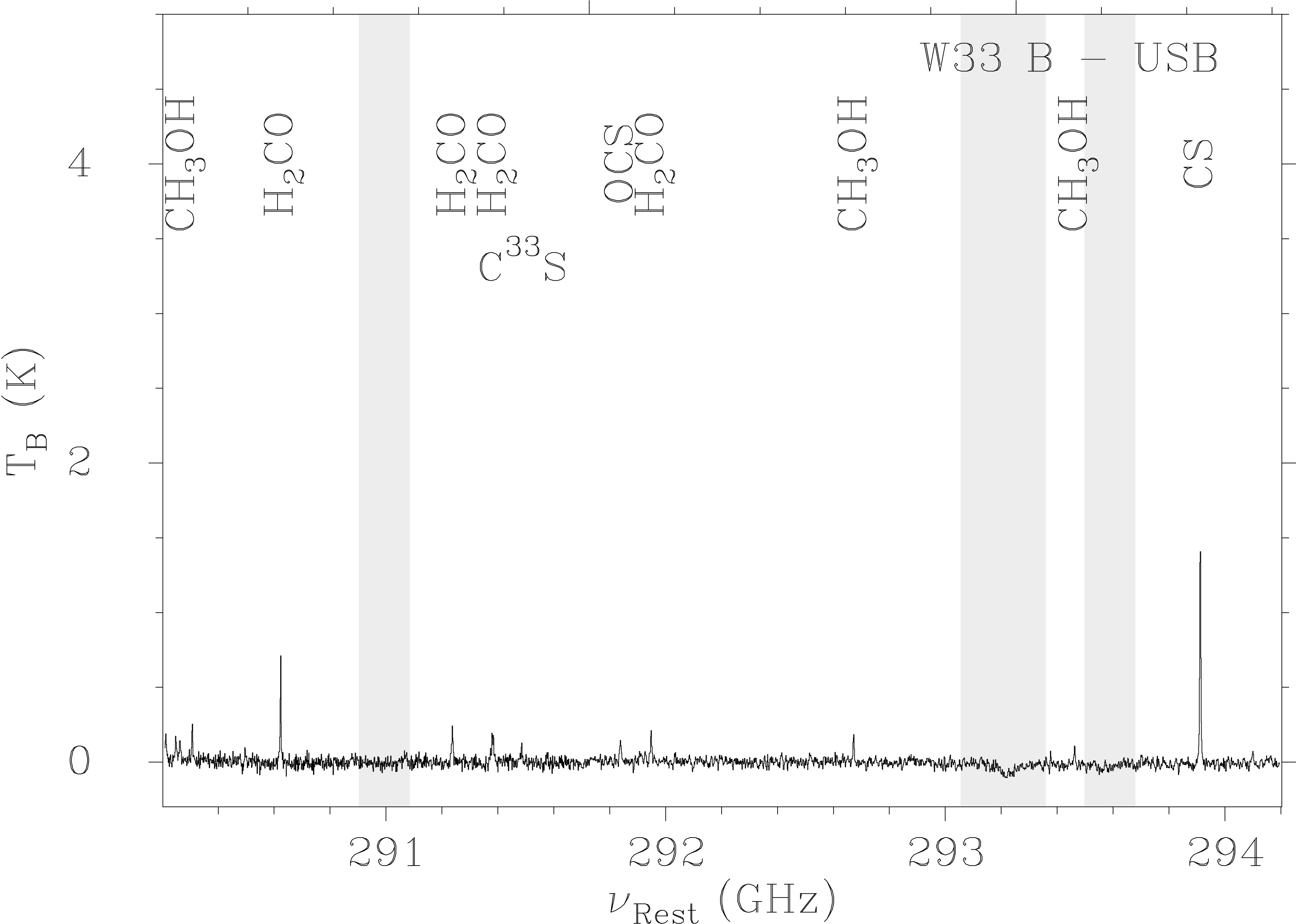 SMA Spectra of W33 B 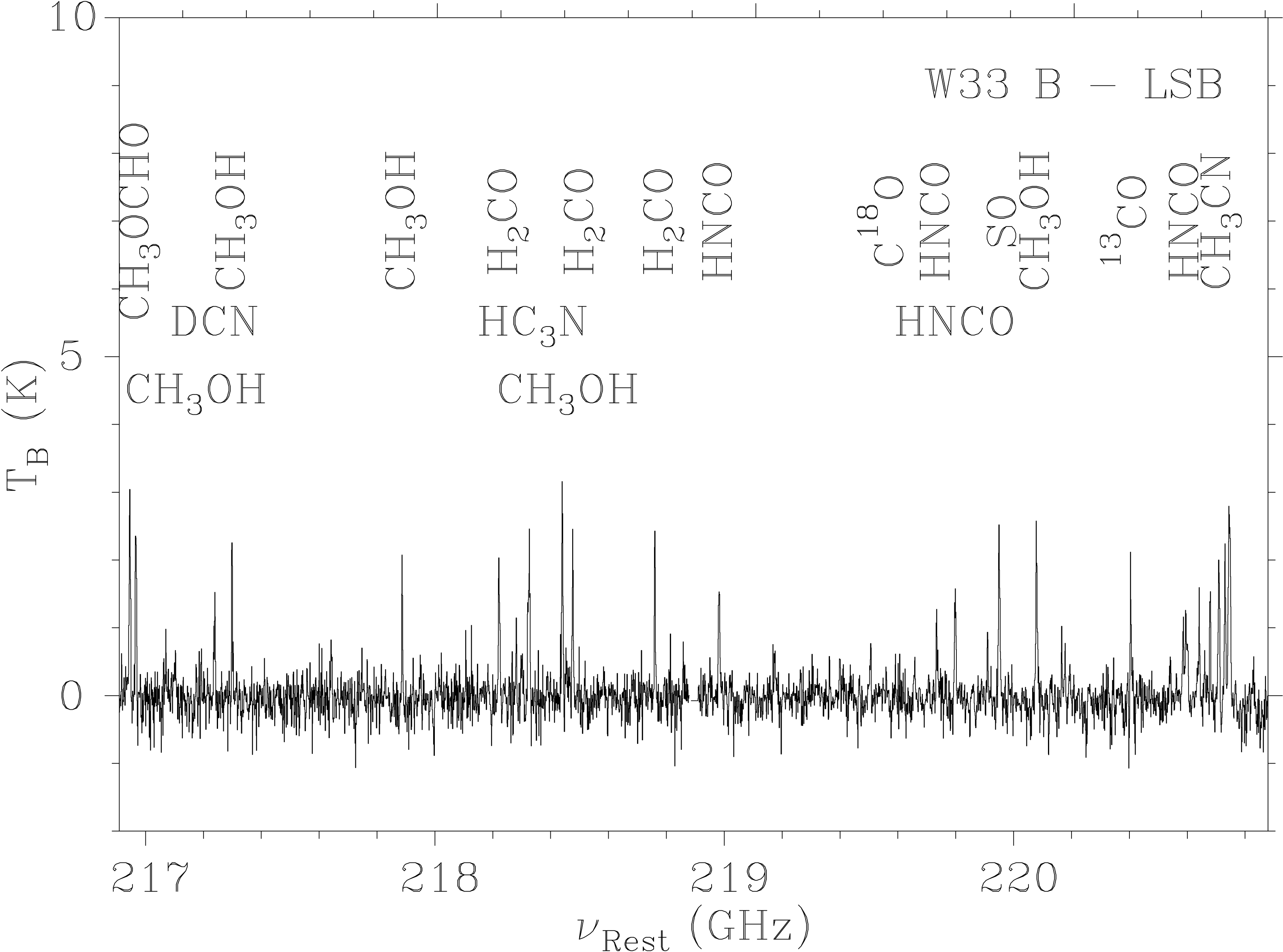 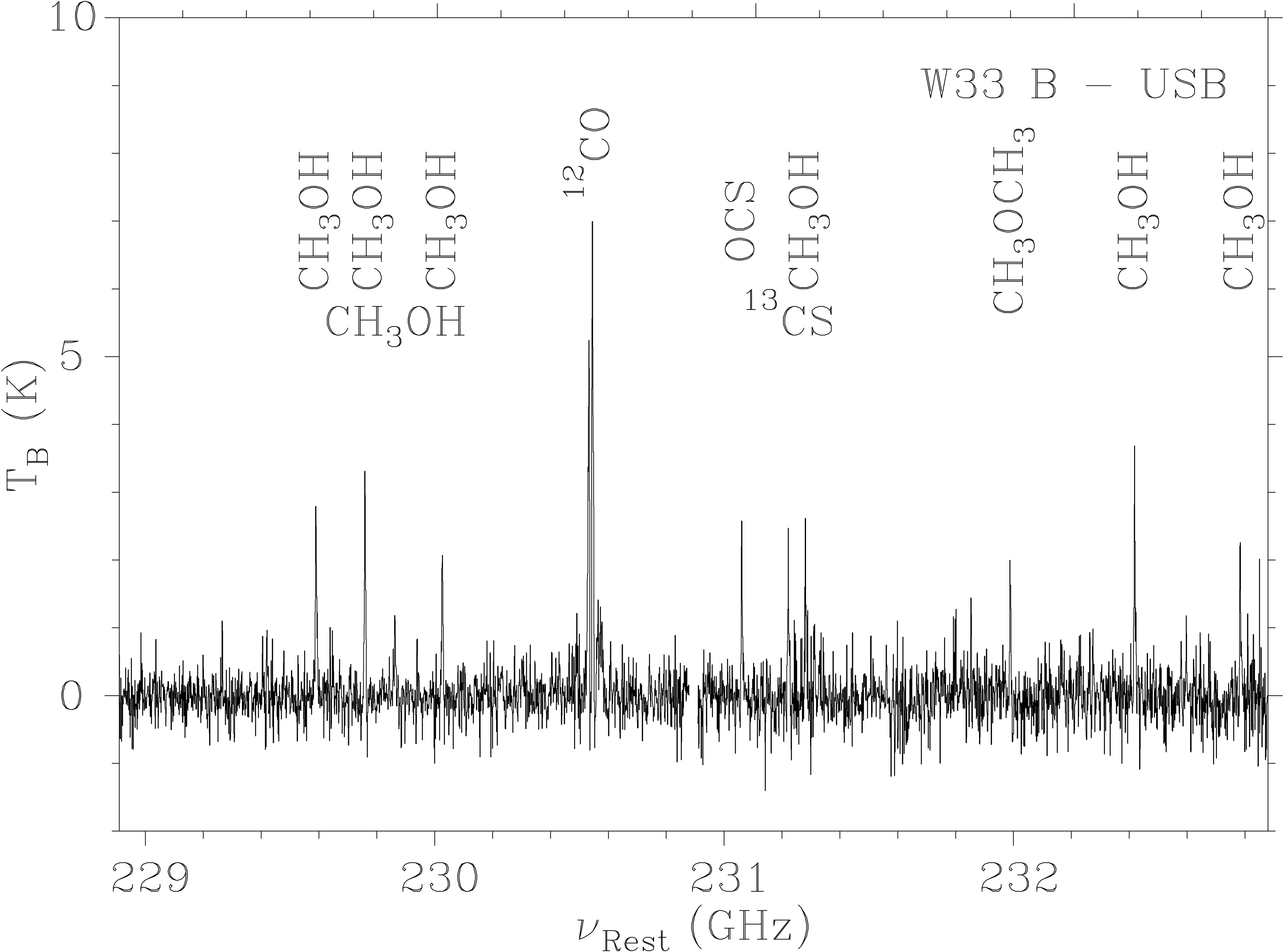 H2CO rotational diagram of W33 B

To study the ultracompact HII region in W33 Main and find even smaller HII regions in the clump, we observed W33 Main with the Very Large Array (VLA) in A configuration in the continuum at 19 and 24 GHz as well as the water, methanol, and ammonia spectral lines at 22-25 GHz (PI: Immer). From the continuum observations, we estimated physical properties of the ultracompact HII region like the electron density and the ionized gas mass as well as the spectral type of the ionizing star, assuming the ionization is dominated by one zero-age main sequence (ZAMS) star.
The water line observations show maser spots distributed over the whole W33 Main source while only one Class I methanol maser spot (being pumped by collisions) was detected offset of the dust and radio continuum sources in W33 Main, confirming a previous detection of Menten et al. (1986) with the Effelsberg 100m telescope.

We also obtained VLA observations in D configuration with the same frequency coverage (PI: Immer). We will study the filamentary gas arms in W33 Main to test if there is anchored gas accretion from large to small scales. The observations of the radio continuum and radio recombination lines will reveal if the ionized gas follows a possible rotating motion at the center of the molecular cloud (Immer et al., in prep.).